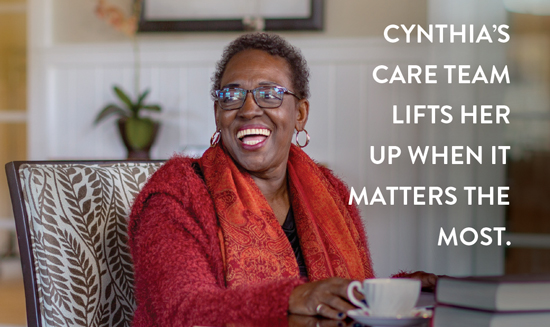 Cynthia Gooch Copley grew up in downtown Lewes. Her grandfather, Ernest Gooch, was the first ambulance driver at Beebe.

When Cynthia was growing up, Lewes was much different than it is today. “Things were quieter. Everyone knew everyone else. Kids played in the street and hung out with friends outside,” Cynthia recalls. “It was a great place to grow up, but as soon as I was a teenager I was looking for any way to get out of here.”

Cynthia got her wish when she married a Marine and moved to California. She later divorced and decided to start fresh in Key West, Florida.

“Key West was perfect for me. There was lots to do … it was a lot of fun,” Cynthia recalls.

She spent several decades in Key West where she also married William Copley, the noted Surrealist artist who went by CPLY. Cynthia and Mr. Copley shared several years together enjoying art, social events, and travel. When he passed away following a stroke, Cynthia decided it was time for another fresh start and she moved to the Fort Myers area and became a successful business broker.

In 2013, Cynthia’s sister was going through a cancer diagnosis, so Cynthia decided it was time to return to Delaware.

When she returned, she decided to get into politics since she had worked on some previous campaigns in Florida.

“There is an energy in politics that other jobs don’t have. It fuels me,” Cynthia said. “Plus, I love meeting new people!”

It was 2017, when Cynthia Gooch Copley noticed a red spot on her breast. “I thought I had been bitten by a spider, so I put some cortisone cream on it and figured it would go away,” she recalls.

The spot did not go away and it worsened, so Cynthia decided to show it to her doctor. She was then referred to Beebe general surgeon Dr. Erik Stancofski.

“I thought it was just this bite, but the next thing I knew I was having a biopsy,” Cynthia recalls.

She was told it was cancer.

“I told myself that it was no big deal … that I could handle this,” she said. “But, then, I was handed a paper to take with me to my first appointment at Tunnell Cancer Center. Seeing the word cancer written, it just broke me. I arrived to the cancer center and I could not get out of the car. I was frozen in shock.”

Another person arriving for an appointment told the front desk staff at Tunnell that there was a woman half out of her car in the parking lot who seemed to need help. A group of Tunnell volunteers went out to help.

“When those volunteers came over, I just looked at them,” she recalls. “I broke down in tears and they helped get me out of the car and get me into the cancer center.”

When she met with her medical oncologist she recalls sitting there and crying for about 40 minutes.

“They just let me cry,” she said. “They held me and reassured me. They let me be me … even though it wasn’t who I was before I was diagnosed.”

Cynthia did six months of intensive chemotherapy. She lost her hair, her skin and fingernails changed, yet she kept her positive spirit.

“You don’t want it to be happening to you. You don’t want to go to treatment. But, then you get to Tunnell Cancer Center and they are there waiting with open arms,” Cynthia said. “I don’t know how I would have gotten through all of this without them. Even on your worst day, they warm you up.”

Cynthia continues to work – most recently on Sen. Thomas Carper’s re-election campaign. “I have to keep working because it is my calling and it keeps me real,” she says. “I wake up ready to go meet new people. I need that because that’s who I am.”

These days Cynthia is receiving less intensive chemo treatments and she is utilizing Delaware’s legal medical marijuana dispensary. “When I started medical marijuana, it made all the difference. We are so lucky to have this here for the state because it allows cancer patients to have relief from pain,” she said.

Cynthia and her new husband, Eric West who met Cynthia when he was chairman of the 38th Democratic District, enjoy time at home where Cynthia dances with their dog, Theodore Roosevelt.

“Throughout it all, Cynthia has remained a vibrant, dynamic woman and it is truly a testament to the great team at Beebe and Tunnell Cancer Center,” Eric said.

Beebe Healthcare is thoughtfully investing in expanding our presence in Sussex County—making excellent, innovative, and accessible care a reality for our friends, families, and neighbors for future generations.

Beebe’s South Coastal Health Campus on Route 17 south of Millville will feature a year-round freestanding emergency department and a second location for the award-winning cancer center. Learn more about these exciting plans: www.nextgenerationofcare.org.

Get helpful tips for prevention and living with cancer, delivered directly to your inbox. Sign up today!

Learn what you can do to reduce your cancer risk. READ MORE. 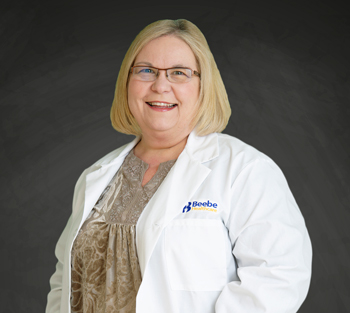