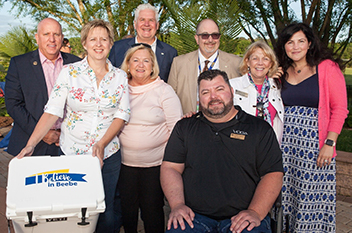 The Banks Wine and Spirits family are the newest members of Beebe Healthcare’s 1916 Club. As members of this Club, they celebrate Beebe’s founding in 1916 by giving $1,916 annually to support the hospital’s initiatives.

Celebrating their support of Beebe Healthcare and the “I Believe in Beebe” campaign (left to right) in front are: Monica Banks, Ted Banks, and Kami Banks-Kane. In back are Thomas Protack, Vice President of Development for the Beebe Medical Foundation; Terry and Vanessa Megee, Co-Chairs of “I Believe in Beebe” campaign; Rick Schaffner, RN, Interim CEO, Executive Vice President and COO of Beebe Healthcare; and Judy Aliquo, President and CEO of Beebe Medical Foundation.

For more information about Beebe Medical Foundation or to make a donation, call (302) 644-2900 or go to www.beebemedicalfoundation.org. To learn more about how Beebe is Creating the Next Generation of Care, go to www.nextgenerationofcare.org. The “I Believe in Beebe” Campaign began in January 2016 with its quiet phase of meeting with major donors. On October 29, 2018, the Beebe Medical Foundation announced that $29 Million had been raised towards an overall $34 Million goal. The campaign is slated to end December 31, 2019.