Be Cared For at the Gull House 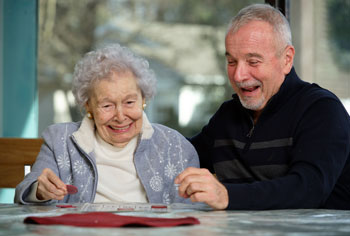 When Michael Cockey’s mom, Irene Vitak, had a stroke, it tossed both of their worlds upside down. Michael, who was working for the Department of Education in Maryland at the time, had to use family leave in order to travel to Rehoboth Beach to take care of his mother.

“It was clear to both of us that nothing would ever be the same,” Michael recalls.

While he was able to return to work, he knew he needed to relocate to Rehoboth to help his mother. Soon, Michael and his partner, were planning their move to Fenwick Island where they had a home. “It was a frenzy, we had some things in Delaware, some in Maryland, and it was all overwhelming,” Michael said.

“A neighbor told me about the Gull House so I made an appointment and brought mom to meet them,” he recalls. “It was like a godsend for us. The Gull House welcomed both mom and I with open arms … they are now an extension of my family.”

A few years later when Michael’s partner passed away suddenly, the Gull House was there for him again. “It was such a relief for me to know that mom was having fun and cared for while I was taking care of estate details and starting my own grieving process,” Michael said.

Michael often attends the caregiver support group hosted by Gull House, making friends who are also caring for parents. The connections and the support of the Gull House staff have made all the difference for him.

“It’s such a transition to go from child to caregiver. It is incredibly difficult, but can also be rewarding,” he said. “I recommend getting into a routine that you both enjoy. I always make sure we eat meals together so I can make sure she is nourished. We get her hair done on Saturdays and we go to church on Sundays. The routine really helps both of us know what the next step is – it’s comforting.”

Irene, 85, or “Renie” to Gull House staff, loves going to the Gull House during the week. “The people are grand – both the people working here and the people who come. We call it our vacation,” Irene said. “I like playing Bingo and joking around with everyone. I make them laugh whether they want to or not.”

WHAT IS GULL HOUSE?
Gull House is a structured and supervised Adult Care program designed for functionally impaired persons who are 18 years of age or older. The primary goals are to avoid or forestall institutional placement; to support or improve social, mental, emotional, and physical levels of functioning; to enhance the quality of life; and to provide respite to family caregivers.

Gull House will be celebrating its 30th anniversary in April! The team is planning a move from its Rehoboth Beach location to a larger space on Route 1 in the Lewes area.