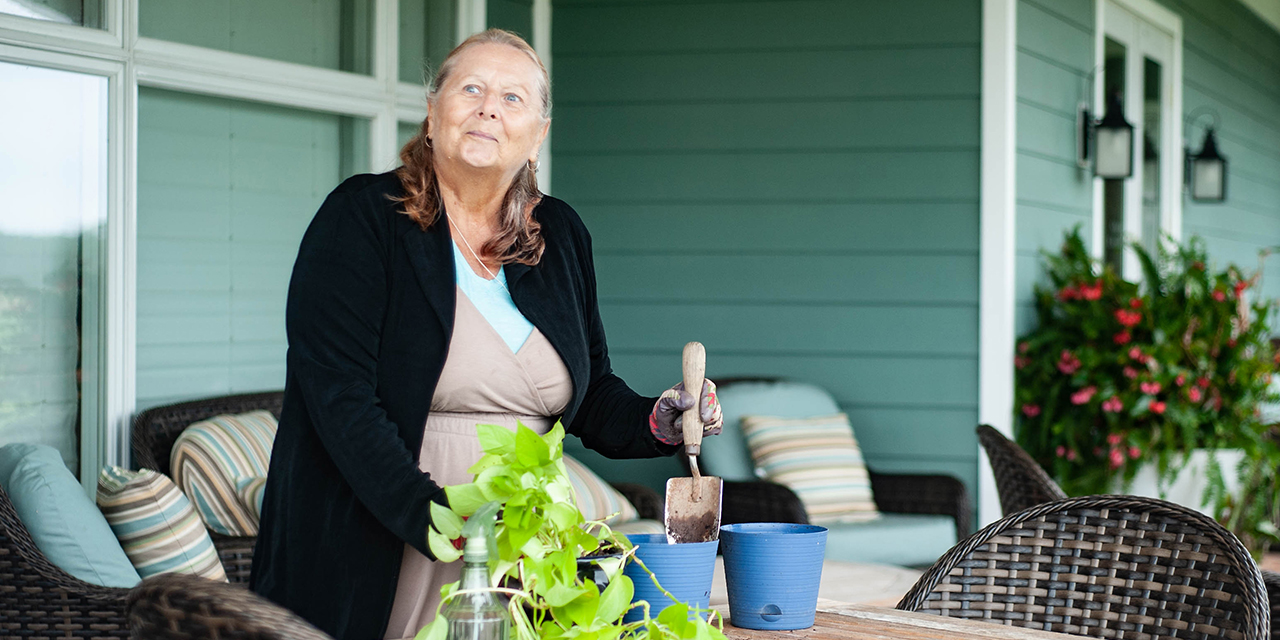 For Cheryl “Corky” Guzzo-Fling of Long Neck, weight management had been a challenge for many years. But after she retired and stopped smoking in 2017, she developed depression and began gaining weight more rapidly. By late 2018, the decision to undergo bariatric surgery had become more than just a choice, it became a life-changing – and life-saving – necessity.

“I’m alive today because of Beebe.”

Corky was first referred to Beebe Healthcare by her primary care physician to begin exploring her bariatric surgery options. From her first appointment with Michael Sofronski, MD, board certified general surgeon specializing in bariatric surgery with Beebe General Surgery, Corky knew she was in good hands. Her care team was not only supportive leading up to surgery, but was also there to keep her accountable to her weight-loss plan following surgery.

“Dr. Sofronski lays down the ground rules,” Corky said. “You have to follow his program for six months and keep a food journal. You also have to go through a lot of steps – dietitian, mental health, cardiac stress test – you have to get clearances.”

With direction from Dr. Sofronski and his team, Corky began to make significant changes to her lifestyle.

Sign up for healthy weight tips from our experts.

“The way I cook had to change,” Corky said. “I had been used to cooking for many, many people, but now it’s just me so I have to change how I cook. I also had to change the foods I keep in the house, and learn portion control.”

Corky also learned that she would need to address a heart issue before she could safely receive bariatric surgery.

“They found thinning of the arteries – that’s what my father had, this same disease – and two of the arteries were pretty bad,” Corky said. “I never knew I had any problems before then.”

She would ultimately have two heart valves replaced by Ted Stephenson, MD, board certified cardiothoracic surgeon with Beebe Cardiothoracic Surgery, in January 2019.

“I’ve never been in any hospital except for giving birth years ago,” Corky said. “With the heart surgery, the ICU team was phenomenal. They are saints. Every nurse that came in, they all were unreal. It was the best experience.”

After completing the necessary heart surgery and six-month nutrition journaling, Corky was finally ready to undergo bariatric surgery in May 2019.

Corky has the gastric sleeve or sleeve gastrectomy surgery, which reduces the size of the stomach pouch by 20%. This reduction means that following surgery, patients are unable to eat much at a time. They must focus on eating healthy foods, chewing food well, and eating more slowly than they may have done prior to surgery.

Corky also was put at ease by her compassionate care team during her hospital stay – before, during, and after surgery.

“With the bariatric team, the care I received was fantastic,” Corky said. “They treated me like I was a star. They were all awesome.”

All told, Corky’s surgery was a success and she was able to be discharged from the hospital three days later. Robotically assisted surgery means less risk of infection because the incisions are incredibly small. It also means faster recovery time for patients.

“When I arrived home, I had a house full of company,” Corky said. “They were all excited for me. Everyone has been so wonderful and so positive … they all support me.”

She is also taking advantage of various support resources to ensure that she stays on-track, including looking to online information and support groups to help her on her journey.

“You really have to change your life,” Corky said. “You lose weight and get your life back that way, but it’s also you have to really commit to making these changes in your life.”

Looking Forward to a New Life

Since undergoing bariatric surgery, Corky’s life has been transformed. To date, she has lost more than 60 pounds (and counting), and is relishing her newfound health and wellbeing – enjoying time in the garden and with her grandchildren more than ever.

“Losing the weight has been so positive for me, I don’t even know how to explain it,” Corky said. “I look at myself so differently … I like myself now.”

“It’s a life-changing surgery and it is so worth it. And I know I’m not done. I have too many people to see, and too much left to do in life.”

Learn more about bariatric surgery at Beebe and set up a consultation by calling Beebe General & Bariatric Surgery & Wellness Center at 302-703-3630 or go to www.beebehealthcare.org/weight-loss.