Sal Curci: PAD Was Affecting My Life, So I Made Changes 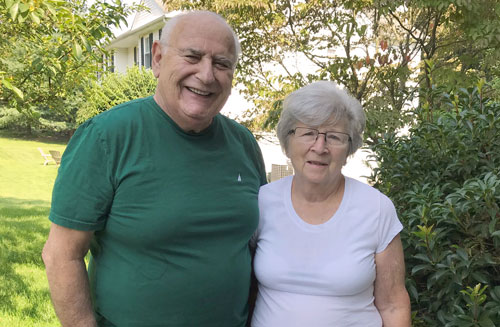 “It was several years ago and I remember sitting on the couch and looking at my toes,” recalls Sal Curci. “I had been noticing they were sore, but at that moment I saw they were gray.”

At the recommendation of his primary care provider, Sal went to Beebe Vascular and saw Dr. Katz.

“It was a shock what he told me. He said I had the beginning of gangrene in my toes and he said I had to lose 100 pounds,” Sal said.

Sal had Peripheral Artery Disease or PAD, which is a common yet serious disease affecting more than 8.5 million Americans.

PAD is caused when plaque builds up in the arteries. The plaque hardens, causing a blockage in the artery, which impairs blood flow. It especially affects our lower limbs – legs and feet – and can cause leg pain, achy legs, and pulse changes.

If untreated, PAD can cause people to be able to move less and can lead to amputation. These risks are especially high for those who are overweight and those who have diabetes.

Do You Need a Vein Procedure?

The good news is that PAD can be managed if caught early, said Dr. Carlos Neves of Beebe Vascular.

If PAD is suspected, patients are evaluated to determine family history, past medical issues and risk factors. Then blood tests and additional diagnostic tests are ordered, such as:

If the results show PAD, there are treatment options, including exercise, changes to diet, and perhaps most importantly, quitting smoking. Some treatments may include:

When Sal first went to Beebe Vascular, Dr. Mayer Katz – who has since retired – was right to recommend weight loss. It is a great first step to reducing the pressure on legs and circulation. Then Dr. Katz did an arterial bypass to help open up a better route for blood circulation – bypassing the artery with the plaque build-up and complete blockage.

More recently, Dr. Neves, who now treats Sal, did another procedure, an angioplasty, to open up some of the arteries.

Sal’s treatment plan was monitored by both Beebe Vascular and Dr. Alberto Rosa, his cardiologist.

It was Dr. Rosa who recommended Sal join the cardiovascular physical therapy program to exercise three to four times each week.

“The doctors told me what to do and I made an earnest effort to get it done,” said Sal, who has lost 71 pounds thanks to his efforts. “Since I’ve lost weight, my A1C (sugar measurement for diabetes) is down and my cholesterol came down a bit, too.”

Sal said having his entire care team be on the same page and all looking out for him has made a difference.

“The entire group – from Beebe Vascular to Dr. Rosa to the care providers in the hospital – they have all been great. I’ve had other health issues and may need a carotid artery procedure this fall, but I can’t say enough about the quality of the care I have received with Beebe,” Sal said. “And, when I have a health concern – no matter where I am – I know I can call them and get a great medical opinion and plan of action.”

Looking for a primary care provider or specialist? Find one through Beebe’s online directory: www.beebehealthcare.org/find-a-doc.