Playing football is a rough sport – and not for the faint of heart. But for Jack Dennis, a 17 year-old, 6-foot, 6-inch athlete, who recently moved to the Delmarva area from Baltimore, Maryland, it is his passion. Jack has played football as well as lacrosse and basketball since he was six. He is a driven and committed athlete, in addition to being an honor roll student who hopes to play sports in college.

In September 2017, Jack thought his hopes and dreams of playing sports had been shattered forever. A hard and crushing tackle on the football field resulted in a debilitating injury. His collarbone had been broken and shattered in several places causing excruciating pain in his shoulder. Beebe Healthcare Emergency Department doctors x-rayed his shoulder confirming the severity of his injury and the need for surgery. The recommendation was that Jack see an orthopaedic surgeon as soon as possible. 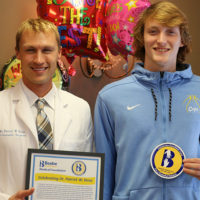 Since Jack and his family had just recently moved from Baltimore, they were not familiar with the orthopaedic surgeons in this area and in fact, did not yet have a primary care physician. They considered taking Jack back to Baltimore for his surgery. On a recommendation from a friend, they decided to try a new doctor in the area, Dr. Patrick Kane, an orthopaedic surgeon whose background includes treating and providing care for professional athletes and skiers. It quickly proved to be an excellent choice!

Dr. Kane was able to see Jack the very day they called for an appointment, and after reviewing his films, scheduled him for surgery a day later. The surgery was extensive. In addition to the bone being broken and needing a plate with screws to hold the bones in place, there were other bones that were shattered and had to be repaired and wired with intricate precision.

Dr. Kane told Jack the recovery would be long and intensive and that if he ever wanted to play any kind of sports again, he would have to take it easy and “follow the doctors’ orders!!” Jack was prepared and ready for the long process of physical therapy that was to follow. He knew his football season for this year was over, and he fully expected he would not play basketball or lacrosse this season either.

The first two weeks were difficult, but follow-up visits to Dr. Kane were encouraging. Dr. Kane would share articles with Jack and his parents about his injury and what to expect. Physical therapy lasted for about 9 weeks and at Jack’s last follow-up visit to Dr. Kane – 9 weeks after the surgery – he was released to play basketball – an amazing recovery and very exciting words to hear! Jack slowly eased into practicing with the team and into playing basketball a little at a time. Currently, Jack is doing extremely well and playing without any pain at all.

“Finding Dr. Kane to do Jack’s surgery was an unbelievable gift,” shares Teresa and Scott Dennis, Jack’s parents. “Dr. Kane’s education and background is quite impressive. But it’s much more than that. Not only is he a great orthopaedic surgeon, he is caring, compassionate and understanding. He understood Jack’s fears and concerns and handled them with such empathy. Jack was extremely sick for several days following the surgery, and Dr. Kane called every day to see how he was doing! How many doctors really do that?” Jack added, “He’s a really great person with a funny sense of humor, and a terrific doctor, he’s just like one of the guys. He made me feel confident that I’d play sports again and seemed committed to making that happen.”

Dr. Kane is the newest addition to the Premier Orthopaedic Bone and Joint Care practice, joining the group in 2017. He is originally from Pottsville, Pa., a small town in Northeastern Pennsylvania. He attended Villanova University for his undergraduate educationfollowed by medical school at Thomas Jefferson University in Philadelphia. Dr. Kane stayed at Thomas Jefferson University and the Rothman Institute for his orthopaedic surgery residency. During his time at Jefferson, he provided physician coverage for the Phillies, the Flyers, the Philadelphia Marathon, St. Joe’s University and his alma mater, Villanova. Dr. Kane also spent six months of his residency at A.I. DuPont hospital in Wilmington where he received specific training in pediatric orthopaedics.

Following residency, Dr. Kane completed his orthopaedic sports medicine fellowship at the Steadman Clinic and Steadman Philippon Research Institute in Vail, Co. While there, Dr. Kane learned to specialize in arthroscopy and joint preservation surgeries of the hip, knee and shoulder. He was able to provide care for professional athletes and skiers from around the world with a wide variety of procedures, such as ligament reconstructions, cartilage and meniscus transplants and repairs, osteotomies, rotator cuff repairs, as well as anatomic and reverse shoulder replacements. Dr. Kane also traveled with the U.S. Olympic and National Ski and Snowboarding teams, both in the U.S. and as far away as Finland and China, and continues to serve as a team medical consultant today.

Dr. Kane currently has offices in Lewes, Milford and Georgetown, and performs all of his surgical procedures at both Beebe Healthcare’s Lewes location as well as the Beebe outpatient surgery center. Dr. Kane says he has found a welcoming home in Southern Delaware with his wife and two children, and is “looking forward to serving the orthopaedic needs of our growing communities for years to come.”

“Jack is so fortunate and has had such a great outcome from his surgery,” shared Teresa Dennis. “We’re all so happy that not only is he back playing sports again, but has full use of his arm and shoulder. We’ve definitely found a friend in Dr. Kane – an orthopaedic physician that we recommend without hesitation for his high level of professionalism, skill, knowledge and willingness to go above and beyond to help support and educate his patients. For all of these reasons and more, we wanted to recognize Dr. Kane through Beebe’s Celebrate Excellent Care Program.”

“It’s been a privilege taking care of Jack and I’m just glad he’s continuing to do well and getting back into his normal routine,” shares Dr. Kane. “My part in his recovery was only a small piece of the puzzle; family members, coaches, physical therapists and ultimately Jack’s hard work are the real stars.”

Beebe Healthcare is a not-for-profit community healthcare system with a charitable mission to encourage healthy living, prevent illness, and restore optimal health for the people residing, working, or visiting in the communities we serve. For more information about Beebe’s Celebrate Excellent Care program and how you can honor a Beebe team member with a gift to support Beebe Healthcare, the local not-for-profit community healthcare system, go to www.beebemedicalfoundation.org/cec.