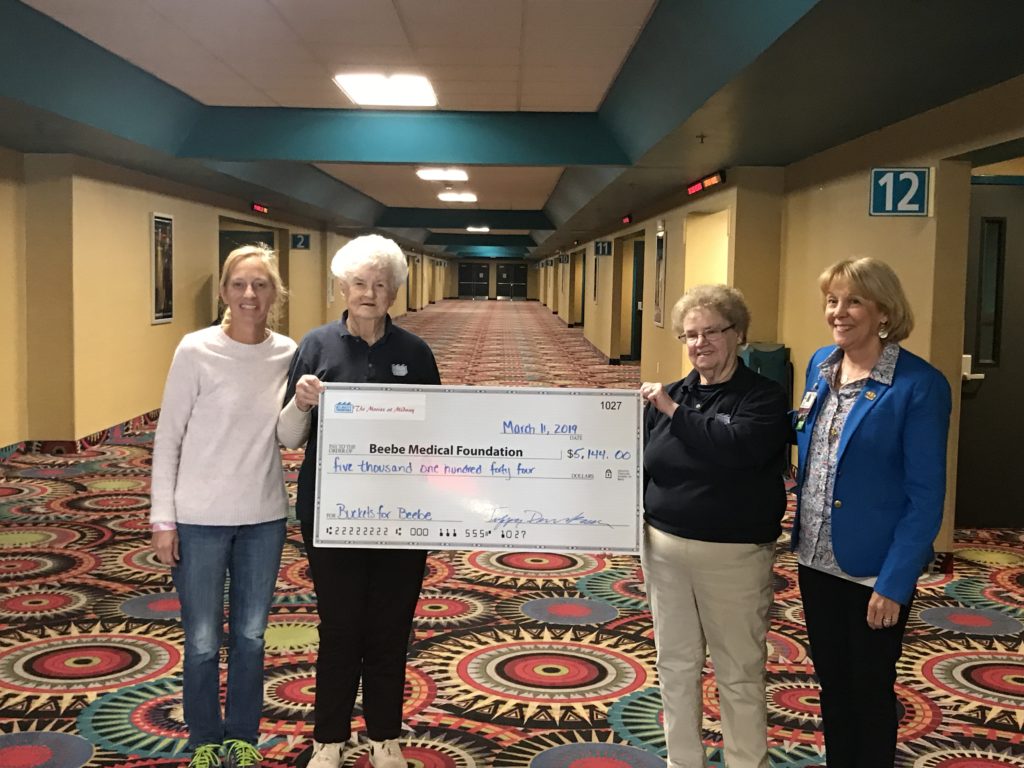 The Derrickson family and Atlantic Theaters’ The Movies at Midway have donated $5,144 to the Beebe Medical Foundation and Beebe Healthcare.

The donation is the first in a multiyear initiative in support of the I Believe in Beebe campaign. Late last year, the Movies at Midway unveiled a new design for its refillable popcorn bucket to include the I Believe in Beebe campaign logo. A portion of the proceeds is donated from the sale of each bucket to the construction of Beebe’s new specialty surgical hospital at the Rehoboth Health Campus.

Movies at Midway is a third-generation entertainment enterprise. Tiffany Derrickson, vice president of Atlantic Theaters, said her family values the fact that Beebe offers state-of-the-art healthcare right here at home. Being a part of the community has been and continues to be an important part of the Movies at Midway.

“My sister, Sabrina Hill, and I are Beebe Babies. Our children were born at Beebe, and we have experienced excellent emergency care at Beebe,” said Derrickson. “We believe in supporting Beebe because we live here and this is our community’s hospital. My father, Richard Derrickson, served on Beebe Medical Center’s Board of Directors from October 1994 until June 2004, and Sabrina served on Beebe Medical Foundation’s Board of Directors from May 2012 until October 2015.”

“The Derricksons are lifelong supporters of Beebe. They understand the importance of giving back to the community which supports their business,” said Judy L. Aliquo, president and CEO of Beebe Medical Foundation. “The Movies at Midway’s Buckets for Beebe initiative is an extraordinary example of a local business supporting its local, not-for-profit community health system. It is also another great reason to visit Movies at Midway, enjoy some popcorn, and support Beebe Healthcare in creating the Next Generation of Care right here at home.”