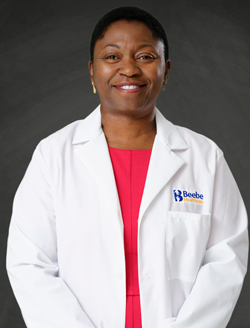 It’s never easy to quit smoking, but in Dr. Adeline Nukuna’s experience women who smoke when they get pregnant have a powerful new reason to quit.

“I’ve seen patients taking quitting more seriously when they hear about the risk of SIDS (Sudden Infant Death Syndrome) and birth defects,” said Dr. Nukuna, who specializes in pregnancy, childbirth and women’s reproductive health at Beebe Women's Healthcare-Plantations. “Those are the realities that really hit home for parents, that motivate them.”

There are two main ways to think about the effects of smoking on reproductive health: how it harms your ability to get pregnant and its effect on the health of your baby.

As you might expect, smoking reduces fertility for both men and women, which means that it’s harder to get pregnant.

The ways smoking can affect you and your baby if you do get pregnant are much more complicated. But, as Dr. Nukuna suggested, they can also drive you to quit.

Smoking has other unpredictable effects on reproductive health, including limiting a woman’s options for birth control.

What Is Smoking Doing to Your Body? Find out.

What Smoking Does to Your Baby

Because many women don’t learn they’re pregnant until they miss their first period, and even longer for women with irregular periods, it’s important to stop smoking before you get pregnant, Dr. Nukuna says.

“During those first few weeks, the baby’s brain is growing, and that’s why it’s really important to quit smoking,” she said.

Even in those first weeks of pregnancy, smoking can harm the newly fertilized embryo, which should be on its way through the Fallopian tubes into the uterus. But smoking damages the tiny hairs in the Fallopian tubes that are supposed to usher the embryo along, increasing the odds that it will instead implant in the tubes themselves.

This is called an “ectopic” or “tubal” pregnancy, and it both endangers the mother’s health and virtually guarantees the embryo will not survive.

Smoking can also increase your risk of miscarriage later in your pregnancy, as well as your risk of a premature birth and all the health risks that come with it.

Moreover, smoking can increase your baby’s risk of birth defects, including a cleft lip or cleft palate. This is a type of birth defect in which the lips or the roof of the mouth (palate) doesn’t join completely, leaving a gap that requires surgery to repair.

Finally, the effects of smoking don’t stop at birth, including potential damage to the child’s brain.

“The effects of smoking can last beyond infancy, into childhood and the teenage years,” Dr. Nukuna said.

Because they have fewer cancer-causing chemicals than regular cigarettes, e-cigarettes are sometimes believed to be a safe alternative, even during pregnancy.

One recent study cited the “widespread flawed perception that e-cigarettes are safe to use during pregnancy.”

The idea is flawed because e-cigarettes still have nicotine, the most addictive chemical in regular cigarettes. And nicotine can harm a baby’s developing lungs and brain, according to the Centers for Disease Control and Prevention.

The flavoring in e-cigarettes may also pose a risk to the baby’s health.

To understand how smoking limits a woman’s choices for contraception, you need to know that some methods work by controlling the levels of one or both of the hormones estrogen and progesterone.

Birth control that uses both hormones is considered to pose a higher health risk in women who smoke. Those risks rise to the point that, for women over 35 who smoke at least 15 cigarettes a day, it won’t even be an option.

For women under 35 or who smoke less, “I really, really counsel them to quit and I encourage non-hormonal birth control,” Dr. Nukuna said. She also notes that contraception isn’t only about pregnancy; some women take it to treat menstrual disorders.

“When you smoke, you take away some of your tools and health choices,” she says.

If you’re pregnant or thinking about becoming pregnant, you may want help quitting smoking. Beebe Healthcare wants to be your partner in making it happen. Our Lewes- and Rehoboth-based counselors have been trained in the best scientific approaches to help you quit.