My Friends Saved My Life 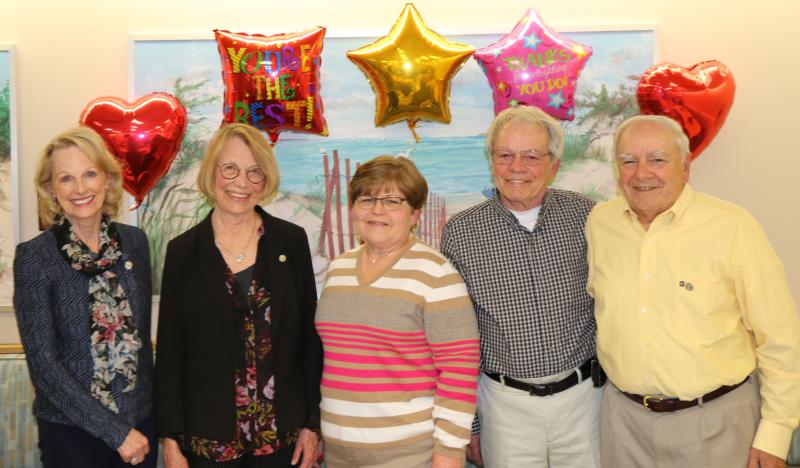 Charles Jackson and his wife Barbara are native Delawareans and have lived in Lewes for nine years. Charles is a retired mason and Barbara is a retired Hewlett-Packard executive. One of the activities that Charles really enjoys is playing bocce ball with friends in his neighborhood. “I’ve been playing bocce ball for about two years and love it,” Charles said. And, in fact, Charles was playing bocce ball the day he had his heart attack – right on the court.

Fortunately for Charles, one of his bocce ball teammates, Joan Kinsey, quickly came to his aid that day. Joan is a nurse practitioner, and she started CPR right away.

Other teammates Connie Nack, Vito Salvatore, and Linda Stone were there to assist and called 911 immediately.

“I owe my friends a lot, and I am so very grateful,” Charles said. “The gift of life is the best gift you can give anybody. My four friends are the kind of people who feel like they didn’t do anything special.”

At the hospital, Charles was unconscious, and doctors were initially unable to determine what happened first, a stroke or a heart attack. The nurses in the Emergency Department were giving Charles their undivided attention and keeping Barbara completely informed of his progress. It was determined that Charles needed an immediate temporary pacemaker. He was taken to the Cardiac Catheterization Lab for the procedure before being transferred to ICU, where they hoped to stabilize his condition.

The morning after the heart attack, Dr. Qureshi shared his concern about the results of Charles’s blood work. It was possible that another heart attack could occur at any time without additional intervention. Charles’s wife Barbara gave Dr. Qureshi permission to do a cardiac catheterization. The catheterization showed that Charles had two arterial blockages, known together as the widow maker, which would require stents. Charles also had a pre-existing condition called a left branch bundle block, which was diagnosed about five years before. The heart attack had worsened this condition, and Charles now needed to have a cardioverter defibrillator implanted. Two days later, the procedure was completed in a six-hour-long surgery, and three days after that, Charles was home.

“Dr. Qureshi was able to sort the feelings from the facts, and that is so important,” Charles remembers. “He was so respectful of my emotions and gently helped me understand what was happening at each step of my journey.”

Charles’s care in the ICU was extraordinary, he said: “I specifically remember two nurses, Amy Bolden and Amy Griffin, who were with me every day. But it’s not just about nursing; it’s about a whole different kind of care than we have experienced in the past. It’s about compassion and respect, and making us feel special.”

“Nothing was ever too much. Nothing was ever an inconvenience,” Barbara shared. “The nurses weren’t just treating Charles; they were treating both of us as a family. Even the staff who worked in housekeeping and dietary were concerned about our well-being and were constantly checking and asking if there was anything they could do. It was obvious that everyone at Beebe was part of the team that was there to take care of us.”

“Dr. Qureshi told me that I was the ‘worst’ kind of heart patient,” Charles recalls, “because I didn’t present any prior symptoms before having the heart attack. I had no dizziness, numbness, pain or tingling. My health had been really good. It just goes to show you that you can be a healthy person and still have a heart attack.”

Once Charles was home, he received the services of Beebe Home Care Services.

“They were amazing,” Charles said. “A nurse, a physical therapist and an occupational therapist came every week, and they were extraordinary. They were really thorough and I learned a lot from them. I now know how to take my pulse, and they taught me the importance of monitoring my blood pressure and oxygen levels, and why my heart rate is so critical.”

Barbara and Charles have two children who were there to support them both throughout this ordeal – a son who is a police sergeant in New Castle, and a daughter who is a schoolteacher in the Appoquinimink School District. “My family was such a support to me,” Charles said. “I don’t know if I could have handled it the way that Barbara handled it. She’s a pro … she’s tough. I can’t think of anybody in a crisis situation that I would want by my side other than her. A lot of people don’t get a second chance. There are so many things that could have gone wrong. We’ve had so much community support through it all. Our friends and neighbors have sent cards, provided meals. Everyone gathered around us to help.

“I believe that I survived for a reason,” Charles said.

Barbara said she was initially worried that Charles wouldn’t receive the care he needed. “I’ve had a huge change of heart because of the extraordinary services and care Charles received at Beebe under the care of Dr. Qureshi and the Beebe Team,” she said.

It has now been eight months since Charles’s ordeal; he is doing wonderfully and anxious to get back on the bocce ball court.

There is no doubt that the immediate and effective application of CPR administered by Charles’s teammate, Joan Kinsey, saved his life. According to the American Heart Association, more than 320,000 sudden cardiac arrests occur every year outside of a hospital setting, and almost 90 percent of them occur at home. Immediate application of CPR can triple a victim’s chance of survival. Community CPR classes are becoming more and more popular, and as part of Beebe Healthcare’s mission to encourage healthy living and prevent illness, educators provide free community CPR classes to the public. Classes are held on the second Saturday of each month at Beebe Medical Center in Lewes. The classes are free, but a reservation is required. Each class has 10 seats and lasts approximately three hours. For more information or to reserve a spot, call 302-645-3248 between 8 a.m. and 4:30 p.m. Monday-Friday.