The Phone Call That Saved a Life 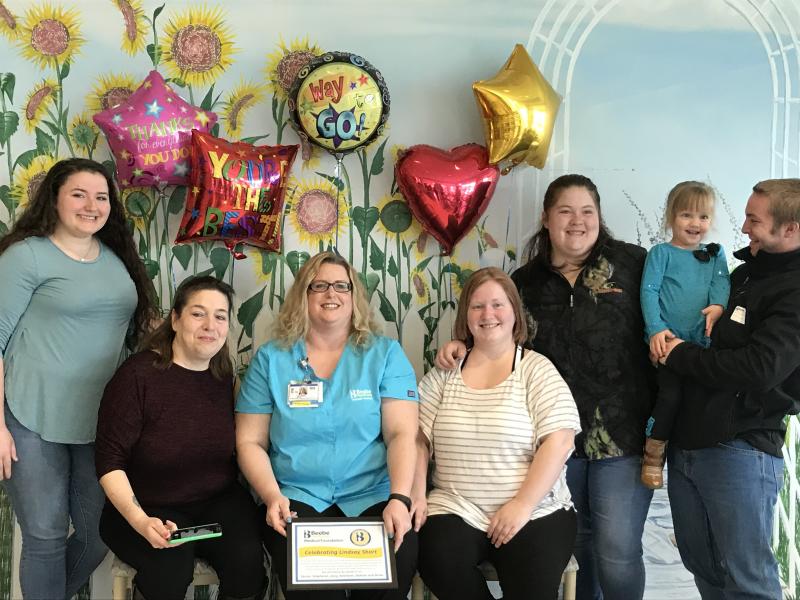 It was just another shift for Lindsay Short, who works at the registration desk in the Emergency Department at Beebe Healthcare. A young woman and her fiancé entered and checked in. She had symptoms of flu. As the couple settled into the waiting area, Lindsay turned her attention to the next patient. A little while later, she heard the woman’s phone ringing.

After the woman answered, it was obvious something was terribly wrong; she started crying before handing the phone to her fiancé. He spoke to the person on the other end and then quickly rushed out of the waiting area, heading for the parking garage. The woman stayed behind and made another call from her phone. Lindsay went about her work and soon, the woman approached her desk, tears streaming down her face.

“I knew something was wrong, so I asked her what I could do to help,” Lindsay recalls. The woman, Stephanie Robinson, explained that her sister was in a horrible car accident on Route 24. Stephanie’s mother, Tarisa, was home and heard the accident called in over the fire radio she has at home because both her husband and daughter are firefighters. Stephanie’s father called and confirmed the car accident involved Stephanie’s sister, Katelynn, who had been driving home with her best friend Dakota.

“Stephanie’s voice was shaking. Her hands were shaking. I could tell she was really upset,” Lindsay said. Stephanie explained that her fiancé was headed to the accident because they were worried their 3-year-old daughter Zoey was in the car with Katelynn.

Stephanie’s mom, Tarisa, has been in the emergency room the night before with an epileptic seizure, so Stephanie asked if Lindsay could be with her when she called to talk to her mom about Katelynn’s accident. Stephanie made the call and talked to her mother briefly. Her mother had already learned about the accident and was very upset. Stephanie asked Lindsay to talk to her mother to try to calm her down. At one point, they learned that Zoey was with Tarisa and not in the car accident, but shortly after, Tarisa stopped talking and then the phone went dead. When Stephanie called back, there was no answer.

“We were very concerned about her mother’s health and safety at this point,” Lindsay said. “Stephanie called her fiancé who was headed to the accident to tell him their daughter was fine, but that they had lost communication with her mother.” Brian Howard, Stephanie’s fiancé, decided to head to Tarisa’s house in Angola to check on her.

Stephanie continued to try to call but got no answer.

“I just knew something was wrong,” Lindsay said. “I knew I had to do something, so I called the police to see if someone could go to the house to check on her.”

Brian pulled up to Tarisa’s house and ran to the door. As he rushed into the living room, his worst fears were confirmed. Tarisa lay on the floor. Zoey was sitting next to her, holding the phone, and just saying, “Mum-Mum. Mum-Mum.”

As Brian prepared to call 9-1-1, the police officer arrived. The two of them worked to try to wake Tarisa, who was unconscious. The officer called an ambulance. As the ambulance arrived, Tarisa began to wake and was quickly put on a stretcher to head to the Emergency Department. Brian collected Zoey and prepared to head back to Stephanie and the Emergency Department where Katelynn, Dakota, Tarisa, and Stephanie were all receiving treatment.

“It was the worst day of our lives, but luckily everyone ended up being fine for the most part,” said Tarisa Morley a few weeks later, after everything had settled down. “I just think it was destiny that Lindsay was the one at the Emergency Department that day. Other places and other people wouldn’t have done what she did. She saved my life that day.”

Katelynn and Dakota were bruised and scraped, but both were fine, and luckily none of the children were in the car with them during the accident, which was caused by a reaction to medication. It was a tearful reunion recently when Lindsay met back up with Tarisa and her family in Angola.

“We will never forget what you did for us,” Tarisa told Lindsay. “You will always be special to us.”

Beebe Healthcare is a not-for-profit community healthcare system with a charitable mission to encourage healthy living, prevent illness, and restore optimal health for the people residing, working, or visiting in the communities it serves. For more information about Beebe’s Celebrate Excellent Care program and how to honor a Beebe team member with a gift to support Beebe Healthcare, go to