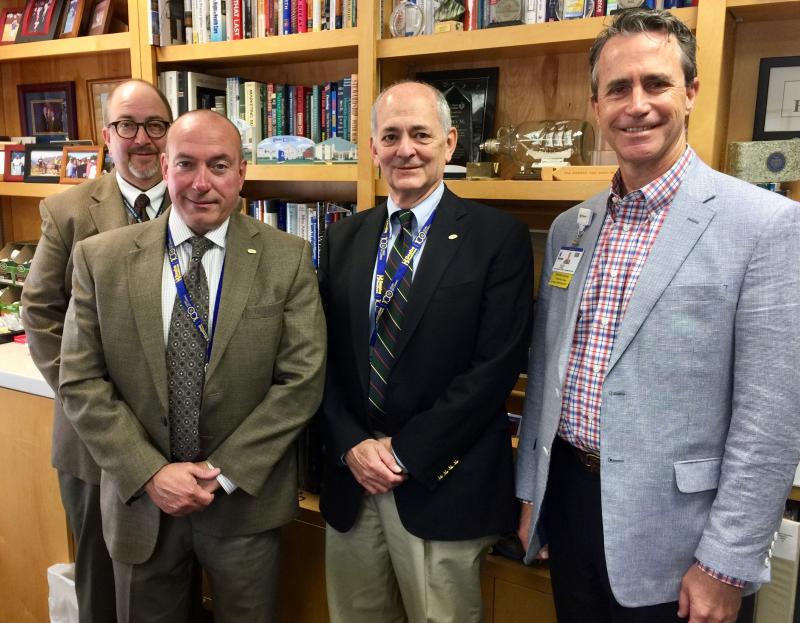 It might sound odd for the president of a community healthcare system to say: “We’re trying to keep people out of the hospital.” But with the daily average inpatient census growing in Beebe Healthcare’s hospital in Lewes, Chief Executive Officer Jeff Fried and his team are doing all they can to keep those numbers manageable

Opening more walk-in centers to increase access to care, such as at the Rehoboth campus on Route 24 and on Route 26 in Millville, is helping ease the pressure. “Walk-in treatment is less expensive for everyone,” said Fried.

Working with primary care physicians to help manage their practices also helps. Beebe owns a number of practices and encourages keeping a few appointment slots open each day so patients who have immediate concerns can get in to see the doctor without long waits or resorting to the emergency room.

Practices have also added nurse practitioners and physician assistants to extend their ability to see patients, and front-office staff are trained to triage calls so those with the most urgent needs are seen first. “With practice transformation,” said Alex Sydnor, vice president for external affairs, “the goal is to create opportunities for patients to be seen in the office. We want to keep chronic conditions from evolving to emergencies.”

Those efforts are working. Rich Schaffner, Beebe’s chief operating officer, said in the main campus emergency department in Lewes, the number of treat-and-release patients is decreasing. There’s also been no increase in people who come in for care and leave without being seen. “That number is below 2 percent,” said Schaffner.

“Still, we’re seeing an increase in sicker patients going to the emergency department, and our daily inpatient census is growing. In the fiscal year that ended June 30, 2016, our average daily inpatient census was 136,” said Schaffner. “So far in fiscal 2017, our average daily census is 152 patients. We’re projecting that will increase to 155 by the end of this fiscal year.”

“It’s stretching our resources, and it’s the reason we’re looking at expansion,” said Fried. With constant changes and advances in medical technology, and the fact that 55 percent of Beebe’s operating revenues already come from outpatient activity, Sydnor said determining just how much to expand is the tricky part.

The irony: income is up

While Beebe continues to focus on keeping people out of the hospital, growth in the inpatient census and overall volume increases have a positive side. A community benefit report from Beebe published in the March 24 edition of the Cape Gazette shows an impressive bottom-line improvement between its comparative years of fiscal 2015 and 2016. When operating expenses were subtracted from operating revenues in 2015, the bottom-line income from operations figured in at $6.75 million. In fiscal year 2016, that number more than doubled to $16.28 million.

Paul Pernice, vice president for finance, said volume drove revenue growth to a 15 percent increase. In 2016, total operating revenues were $386.84 million compared to $341.08 million in 2015. ‘We’re getting patients in and out at the same pace, but we’re dealing with more. And it’s consistent through the year. It’s not seasonal like a flu thing. We just have more people living here year-round now.”

He said the biggest increase came in the operating rooms, for inpatient and outpatient procedures. “That was an increase of 10 percent, and that also drives greater revenues for imaging and rehabilitation.”

At $149.78 million in salaries, Beebe is by far the largest employer in Sussex County. Insurance costs also rise as Beebe adds more physician practices to its medical group. “More physicians give us more exposure, and technical practices such as urology and vascular are more costly to insure. We’re not surprised by that,” said Pernice.

The nation’s Affordable Care Act, also known as Obamacare, has contributed to greater revenues. “It’s given us an increase in insured patients and a decrease in charity care and bad debt. It created a hit on the Medicare side – in terms of reduced reimbursements – but more people with insurance has helped,” said Fried. “If the exchanges went away or people lost insurance, it would be a concern for hospitals.”

Fried said Beebe accepts charity care and bad debt, and unreimbursed expenses from Medicare and Medicaid, as part of its operating philosophy. “We provide safe and quality care to all who come, regardless of their ability to pay. In fiscal year 2016, those unreimbursed costs totaled more than $40 million.”

Pernice said the $16.28 million income from operations – roughly 4 percent of total operating revenue – exceeds the 3 percent threshold required by ratings agencies like Standard and Poor’s for A-rated community-owned hospitals. “We expect to finish in the 3.5 percent to 4 percent range again this year,” he said.

“The bottom line is that increased volume and diligence in managing our resources are what’s making this happen,” said Fried. “In graduate school, they taught us to say good management when things are going well. But it really comes down to the fact that the community and doctors have confidence in us – in providing quality and safe care, and a good experience. As long as we meet the needs of our doctors, they will continue sending us their patients.”

PROJECT UPDATE [JUNE 15, 2018]: Due to anticipated changes in our community’s use of healthcare facilities and services, we have re-evaluated the scope of our expansion and decided to enhance and expand access to advanced medical technologies and outpatient services rather than proceeding with the construction of additional inpatient rooms on the Lewes Campus. To learn more about these changes, and how we’re continuing to make the next generation of care a reality in Sussex County, click here: https://www.nextgenerationofcare.org/2018/06/15/healthcare-is-changing-and-so-is-beebe