Native American Chief Wolf Walker Chet Peden, first Appalachian Cherokee Chief of Delaware, is proud to talk about his walking stick that he carved to recognize his heritage. He can show pictures of intricate wooden figures he whittled by hand as a way of paying homage to his Native American roots. 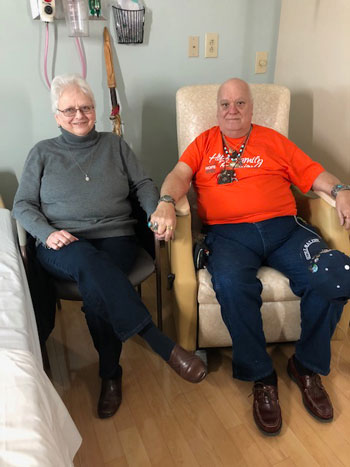 However, when he talks about his passion for carving, there is a sadness that enters his eyes.

Chet no longer can carve figures because his fingers have become incredibly weak. Chet is fighting cancer, which was discovered by accident.

"I was supposed to go in for knee surgery, but I was feeling weak,” Chet recalls. “I saw several physicians and specialists about it, however it wasn’t until they did the blood testing for the surgery that they found the cancer. It was stage three and it had already gone into my liver and lungs.”

Chet’s wife, Nancy, was by his side when they heard the news.

“It was pretty devastating for us,” Nancy said. “We were doing alright on our retirement, but this diagnosis came out of nowhere and we weren’t prepared for the financial burden.”

Nancy began doing research and making phone calls to see if there was some financial support for them. “I was making 10, 15 calls per day and getting nowhere,” Nancy recalls. “After about 60 phone calls, I was breaking down and I finally talked to Jude at Tunnell Cancer Center about it.”

Judith Johnson-Shupe is the psychosocial services specialist at Tunnell. Known as Jude, she helps patients find the support they need. “It’s really rewarding to work with patients like Chet and Nancy and to help ease some of their burden,” Jude said. “When I heard of their financial struggles, I put them in touch with Bringing Hope Home. The couple met with the film team from Bringing Hope Home, a nonprofit cancer charity based in Malvern, Pa. The charity, which provides financial and emotional support for cancer patients and families in Pennsylvania, southern New Jersey, and Delaware, will feature the Pedens in a video to be released in May as part of the charity’s 10 year anniversary celebration.

Bringing Hope Home started in 2008 in memory of Nicole Isenberg. Paul Isenberg was a senior at West Chester University when he met the love of his life, Nicole. After they were married, they had their first child Christopher in 1995 and shortly after, Nicole became pregnant with their second child, Gabrielle.

During her pregnancy with Gabby, Nicole wasn’t feeling well and finally decided to go to the doctor to see what was going on. Nicole then heard three words that changed her life forever: “you have cancer.” While she was nine months pregnant, and at the age of 32, Nicole was diagnosed with Stage IV Hodgkin’s Lymphoma.

Soon after her diagnosis, Nicole gave birth to a healthy baby girl and immediately started intense chemotherapy. The Isenbergs felt blessed that they had the support of their family, friends, church, and so many in the community, but they met so many families that were going through their cancer battle alone.

It was during her six years of treatment, that Nicole told Paul to get all of his “great guys” together and host a charity dinner. The first Great Guys Dinner was held in 2001 and raised $13,000 for the American Cancer Society.

“All the money raised at Bringing Hope Home is used to help families with cancer pay their household bills, such as their rent, mortgage and household utility bills during their illness,” said Amy Forkin of Bringing Hope Home. “We want families to know that they are not alone and that we are here to help them.”

Families apply for grants, which can range up to $2,000. The grant funds are paid directly to the utility vendors or to supply gas or grocery cards. Last year alone, Bringing Hope Home paid bills for 583 local families with cancer.

“It is incredibly rewarding work, and we are blessed to meet so many wonderful families like the Pedens,” said Judy Swahl of Bringing Hope Home.

Chet met Nancy in a movie theater. Nancy was causing a stir in the theater because she and a girlfriend were trying to find seats in the already darkened theater. “They were being noisy and were about the get thrown out,” Chet recalls. “I reached over and said, ‘sit down,’ and pulled her into the empty seat next to me. That was it. And, here we are 56 years later.”

The couple raised their two sons in southern New Jersey and later retired to Delaware. They now live in the Milford area and travel to Tunnell Cancer Center regularly for treatment.

“We are so grateful for the support we receive here at Tunnell and to Bringing Hope Home,” Chet said. “I just can’t even express how much it all means to us.”

“You know, money troubles are very hard on a marriage. We were feeling rocky there when we started cancer treatments. You get to a point as a patient that you feel like such a burden and that can turn you angry,” Chet said. “I don’t want that to be how our marriage is and now we can focus on each other and focus on healing – because Bringing Hope Home was there for us and helped us with a grant.”

During a recent treatment, the Pedens met some of the team members of Bringing Hope Home who travelled to Tunnell Cancer Center for the filming. It was their first time meeting face to face, even though, as Chet said, it was like they have known each other for years.

“Cancer is a tough journey and you have to stay positive,” Chet said. “I plan to get through this and maybe someday I will get back to carving. Maybe I won’t, but I plan to find a new passion for myself. Life’s too precious – I want to enjoy every minute I have.”