Michael Roob: Tunnell Cancer Center Helped Bring Me Out of My Shell

Michael Roob found out he had cancer during a routine Prostate-Specific Antigen or PSA test. This blood test screens men for prostate cancer by detecting a protein produced in the tissue of the prostate.

Dr. Kwan did a biopsy. Of the 12 tissue samples collected, 10 had cancerous cells. 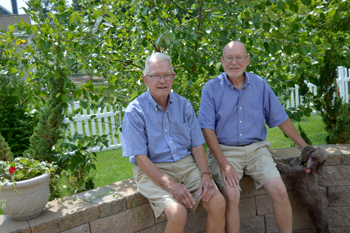 “It was prostate cancer. I was surprised and worried, but Dr. Kwan and my radiation oncologist at Tunnell Cancer Center, Dr. Brian Costleigh, mapped out the plan and I was confident that we would be successful,” Michael said.

He completed 44 radiation treatments at Tunnell over the course of a couple months earlier this year. Prostate cancer is the second most common cancer in American men. According to the American Cancer Society, about 1 in 7 men will be diagnosed with prostate cancer.

Men who are 50 or older should have an annual PSA test, said Dr. Costleigh. It is the best way to detect cancer early and have a positive outcome.

While prostate cancer is serious, it is a survivable disease. With the modern radiation technology, side effects for prostate cancer treatment are dramatically less than in the past and is by and large very tolerable, Dr. Costleigh said.

Sitting in his living room at the Reserves at Lewes Landing with his partner, Jack Wood, and their dog Cooper, Michael reflects on the experience.

“When you hear the word cancer, it seems very daunting. Having only lived in this area for a few years, we didn’t know what to expect,” Michael said. “It sounds odd to say, but the whole experience was extremely positive.”

Michael and Jack moved to the Lewes area from Baltimore in 2013. Michael is retired from the defense industry where he was an engineering draftsman. Jack retired from the Defense Department as a contracts administrator.

“We had been vacationing here since we met in 1977,” said Michael. “When it came time to retire, we knew we wanted to move here for the sense of community and quality of life.”

Michael, a native of Monkton, Md., and a graduate of Towson University, met Jack, a McDaniel College graduate, from Easton, Md. who served in the United States Air Force, in Baltimore in 1977. “The rest is history, as they say,” Michael said with a grin.

While undergoing treatments at Tunnell, Michael met several patients who were also being treated for prostate cancer. We formed a sort of club and we would joke around while we were getting treatments.

“Having cancer has actually helped me be more social,” Michael said. “When you have cancer, you appreciate everyday life more. Before I was more introverted. Now, I find myself drawn to going to events or visiting friends more often. “I find more joy in the little things – like watching a butterfly or enjoying a beautiful sunny day.”

Michael and Jack enjoy spending time at CAMP Rehoboth, eating at Lori’s, or walking the trails at Cape Henlopen State Park. Jack is involved at St. Jude’s Catholic Church and they both enjoy attending art shows in the area.

“We find ourselves going out more and often the topic of cancer cares comes up. It seems each time we hear a story from someone, they remark about how amazing Tunnell has been to them or a loved one,” Michael said. “From our experience, we know it to be true. From top to bottom, the care was amazing. I don’t think I’ve ever received more hugs. The positive attitudes of the people around me were infectious.”

About Tunnell Cancer Center
The Robert & Eolyne Tunnell Cancer Center at Beebe Healthcare was established in 1995. It has received the Commission on Cancer's highest accreditation with commendation as a comprehensive community cancer center. Its clinical specialties are medical oncology/hematology and radiation oncology. It also offers a multidisciplinary approach for planning all cancer treatment. Nearly 200 patients visit the center each day. For more information on cancer care at Beebe, go to https://www.beebehealthcare.org/tunnell-cancer-center.