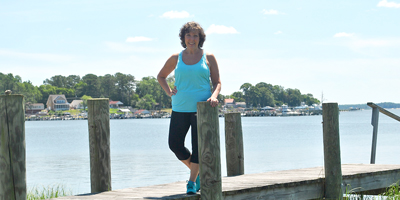 Ovarian cancer ranks fifth in cancer deaths among women, accounting for more deaths than any other cancer of the female reproductive system. It is estimated that about 22,530 women will receive a new diagnosis of ovarian cancer and about 13,980 women will die from ovarian cancer.

Henrietta Belcher Stack of Millsboro didn't think she would ever be diagnosed with ovarian cancer, especially since she had her ovaries removed.

Can You Prevent Cancer?

From Diagnosis to Treatment & Back to Health

Sitting in her living room near Millsboro, Henrietta Belcher Stack – Henri as her friends call her – thinks back to the time leading up to her diagnosis with ovarian cancer.

“I had pain in my side. My grandchildren were here and we were all getting ready to go to Disney, so I figured it was just the exertion of chasing after two-year-olds,” said Henri.

However, when the pain woke her up in the middle of the night in Florida, she knew she better get it checked out. It wasn’t a normal pain, she recalls, it was stabbing and extremely uncomfortable.

When she was diagnosed with ovarian cancer, she was shocked.

Ovarian Cancer: What You Need to Know

Symptoms of ovarian cancer are often hard to detect. It often develops in more mature women and is more common in Caucasian women.

Diagnosing ovarian cancer can also be difficult. Physicians often start with blood tests, ultrasounds, and if a tumor is found then a biopsy can be ordered. While the CA 125 blood test can help diagnose ovarian cancer, the CA 125 protein may also be elevated for other reasons, which is why the test is not regularly ordered for all women.

After her diagnosis, Henri felt as if she were adrift in a sea of information. She researched ovarian cancer and then wished she hadn’t because the information was scary.

“After the initial shock wore off, I remember sitting in my living room, in my favorite chair, thinking about it all, and I just realized that I was not ready to die. I knew I would do whatever I could,” Henri said.

“I was amazed how the path was just laid out in front of me. It was like a smooth transition. One day I didn’t have cancer, then I did and I knew exactly what steps I was going to take,” Henri said.

She did a specialized form of chemotherapy for ovarian cancer and they saw improvements. After the rounds of chemo were completed, it was time for a specialized surgery called Hyperthermic Intraoperative Peritoneal Chemotherapy or HIPEC. Beebe is one of only 41 hospitals in the country to offer HIPEC.

“The surgery has been shown to be highly successful,” said Dr. Spellman. “First, the surgical team removes all visible tumors inside the abdominal cavity. Then chemotherapy drugs are heated to 104 degrees and circulated inside the abdomen to kill any cancer cells not visible to the naked eye.”

Having this kind of advanced procedure tells me that Beebe is dedicated to the health of the community and passionate about bringing the latest technology here,” Henri said. Following HIPEC, Henri recovered at home for about six weeks before doing a second round of chemotherapy and drug therapy.

She is a licensed Zumba instructor and teaches five classes each week around Sussex County. “My students depend on me and I depend on them. They are the reason I make sure to get to class each day,” Henri says with her trademark smile. “Even when I might not feel my best, when I walk in there and see their smiling faces, it energizes me. And, I get to dance almost every day – one of my favorite things!”

“When I’m dancing, I don’t think about anything else,” Henri chuckles.

Henri tells her friends to talk to their physicians any time something just doesn’t feel right. And, she always talks about the benefits of staying positive.

“It was a different type of pain. I just knew something wasn’t right. We need to be our own health advocates,” Henri said. “In today’s world, attitude is so much. You just have to stay positive and love your life. Get rid of the toxic and bring in the love.”