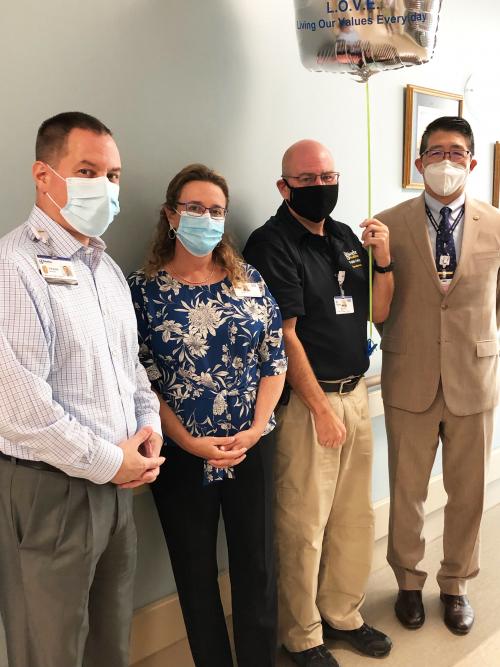 Beebe Healthcare is proud to recognize Michael Truitt as the September recipient of the Living Our Values Every Day (L.O.V.E.) Letter Award.

Michael Truitt, a Public Safety Communications Officer, was awarded this recognition for saving the life of a fellow team member who was choking in the hospital. Several colleagues who witnessed the incident nominated him for this award.

“In one of our cafeterias, Mike Truitt saw a person in distress,” wrote one of the people who submitted a nomination letter. “He went up to the individual and saw that she was unable to verbally respond but motioned with her hands toward her throat that she was choking. Mike’s skills, training, and calm demeanor kicked in and he asked her to stand up so he could administer the Heimlich maneuver, which thankfully provided the results that we all hoped for!”

“Thank you, Mike, for your quick action and for providing the care that a team member needed in an emergency. You are awesome!” the letter continued. “You jumped right in to assist and we are all very appreciative for your quick assistance.  You certainly did the ultimate in keeping a person safe…by saving a life!”

Through his efforts, Michael has demonstrated many of the Beebe values, including “do what it takes to keep everyone safe,” and “act with passion and love for others to make a difference.”

Congratulations, Michael, and thank you for all you do!

Photo caption: Michael Truitt, Public Safety Communications Officer, (third from left) is the recipient of Beebe’s L.O.V.E. Letter Award for saving the life of a colleague who was choking in the hospital cafeteria. Also pictured from left to right are Frank Molino, Director of Public Safety and Security, Marcy Jack, VP and Chief Public Safety Officer, and Dr. David Tam, President and CEO of Beebe Healthcare.

Beebe Healthcare’s L.O.V.E. Letter Recognition Program is similar to an employee of the month program. Team members are encouraged to send L.O.V.E. notes to other team members during the course of the month. A committee then evaluates the L.O.V.E. notes and selects one to receive the monthly L.O.V.E. Letter. Winners are announced in a surprise ceremony in which the committee visits the winner in his or her department and presents the award.  Employees selected for the award receive: