Lewes locals Thomas Killean and wife Kim have made extreme dietary changes, as the result of Tom’s recent Stage 3 diagnosis of colorectal cancer this past November. At first, Tom thought he may have an ulcer, so consulted Sarah Stamm at Mid-Atlantic Family Practice about his initial symptoms. After tests were completed, he was then referred to Dr. Andrew Conn at Seaside Gastroenterology. His colonoscopy showed that there is a cancerous tumor mass in his rectum, and the colonoscopy could not be completed as the scope could not get past the mass. He was then referred to Beebe’s Tunnell Cancer Center for further diagnosis, treatment and follow up. It was then determined after additional scans that the tumor was protruding into his colon which meant there was a high risk for a blockage. 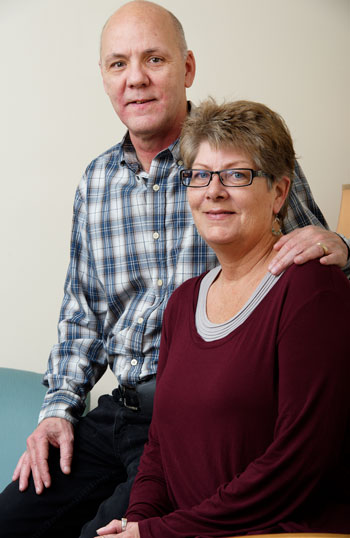 Due to his condition, in consultation with his doctors (Dr. Spellman, Dr. Murukutla, and Dr. Thomas) and dietician Kim Westcott at Beebe Healthcare’s Tunnell Cancer Center, Tom was instructed to follow a low-fiber diet; reason being, any blockage could lead to Tom needing emergency surgery. The low fiber diet forces him to not eat whole grains and fruits, seeds, or veggies with skin, as any type of skin could lead to a blockage. Tom now follows a high protein and high carb diet.

For someone who loved salads, broccoli, peas, whole wheat bread and more, this was a big adjustment. He is currently in a cycle of five weeks of chemotherapy and radiation treatment, with the goal of reducing the size of the tumor prior to anticipated removal surgery with Dr. Spellman, followed by an additional reduced treatment plan. As of late January, he is in his fourth week of treatment, with one week to go prior to a break before the expected surgery.

At the start of his diagnosis, Tom was concerned with initial weight loss, as he was down around 10 lbs., but he said after modifying his diet in consultation with Ms. Westcott and taking a daily anti-nausea pill, this has helped stabilize his weight.

His wife Kim often makes him protein shakes, consisting of whey protein (in powder form, with several flavors available), adding juice or milk, and frozen, seedless berries. These shakes also helped with his weight regain and stabilization, and Tom adds, “taste good too”.

In addition to the daily pre-cautionary anti-nausea pill, he takes a stool softener, an anti-reflux pill, and stresses the importance of water. He says he used to consume 64 ounces of fountain drinks, but has strictly eliminated sodas, and has come to love water and its benefits.

Tom jokes, “My wife Kim helps to keep me in line, and has been a wonderful support person through it all.”

Tom’s wife Kim says that they now all eat the same diet at this house as him, to make things more comfortable and so he doesn’t feel as much as he is missing out. While they can still shop at the regular grocery stores, they are all more mindful when making selections with the potential effects on Tom’s body.

Tom credits his strict adherence to his new diet, including water, as helping him to feel better in regards to food discomforts. Once his treatment is over and successful, he looks forward to celebrating with a big salad, but for now, will stay the course to prevent any blockages.

“Both Kim’s—my wife, as well as TCC dietician, Kim Westcott—in addition my three daughters as well as the outstanding team of providers at Tunnell Cancer Center, have been a tremendous help to me along this journey,” said Tom.