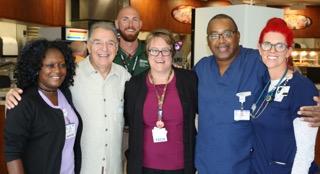 When Nick and Terry DiMinno retired, they decided to start a fresh, new chapter in their lives by moving closer to relatives in Delaware. Moving from Connecticut to Milton was a big change but exciting for them. Leaving their three sons in the New York/Connecticut area was hard, but now their family has a place at the beach to visit! With the house ready for move-in, they began the arduous task of unpacking the boxes and settling into their new home.

Their excitement was dampened quickly however; only days after moving into their new home, on April 25 Nick suddenly became extremely ill. This is what he recalls: “I was on the phone with an old friend of mine, talking about my stereo system, and heard myself responding in gibberish. I said, ‘Marty, I don’t know what’s happening.’ I hung up and came out of the bedroom to get my wife.”

Nick’s wife, Terry, thought he had had a stroke when he came out of the bedroom. “Nick was trying to communicate, but he just wasn’t making any sense,” Terry said, “and being an LPN, I was extremely concerned. We immediately drove Nick to Beebe Healthcare’s Emergency Department where he was quickly evaluated and soon thereafter admitted to the Intensive Care Unit.”

The ICU was Nick’s home for four weeks. He doesn’t remember much about those first few weeks because he was in an induced coma. All five children flew in from other states, wanting to be by their parents’ side during this crisis. Their daughter Toni took a leave of absence from her job. One of their sons, Frank, was at the hospital every day for morning rounds and was the rock that held their family together through this tragedy.

Nick’s illness and the recovery process were tough for Nick, his wife and their family. “I never felt so bad,” Nick recalled. “There was a point that I just wasn’t feeling any better and I remember thinking, if this is how I am going to be, I don’t want to go on like this. I had always been healthy; I was never really sick. It was at this point and out of frustration,” Nick shared, “that I turned my life over to God. I spoke with Keith Goheen, the hospital chaplain, a couple of times and he was extremely comforting, as well as Father Tom from St. Jude’s. Both of these men were extraordinary in their efforts to help support and guide me through my ordeal.”

Nick and Terry’s extended family also came to their aid. “Our good friends, Mark and Linda Goldstein, were in Baltimore during the time I was in the hospital. Mark and Linda decided to drive to Lewes to see Terry while I was still in a coma. Mark’s brother is a friend of Beebe Healthcare’s President Jeff Fried, and when they came to see Terry, they also stopped in to see Mr. Fried. To my surprise, the very next day, Jeff came by my room to visit Terry and check on me.

“The care and compassion we received from every member of the entire ICU team was amazing,” recalled Nick. “We were so impressed with the hospital, with all of the support and attention we received, and the staff of the ICU was unbelievable. The receptionist in ICU, Tammy Stearn, was so friendly and kind to me and my family. Noelle Bolingbroke, one of my ICU nurses, was just wonderful. There are just so many people who helped in my recovery, whether they know it or not. Noah Piper, an RN in the ICU, provided me with more than medical care. He would come back often to check on me and we would just talk. Noah was so comforting to me, just talking and holding my hand. This was huge – not medically, but emotionally. Noah made me smile and laugh when I was at my lowest point, and this made me feel so much better.”

“Everyone on the Step-Down Unit was terrific. Registered Nurse Cynthia Clem was only with us for a few days, but Cynthia left an extraordinary impression on us. It was the way she reassured and comforted me and Terry. The unit secretary on the fifth floor, Delores Person, would come stand in my doorway, put her hand on her hip and say, ‘Now don’t you leave without saying goodbye to me.’ Delores knew how to make me smile. I had to learn how to breathe and chew and talk again. Lucky for me, Nick Bollinger was my speech therapist and we really hit it off. My therapy time with Nick was like a friend helping another friend.”

“The bottom line is, they saved my life,” Nick said, “they all saved my life. We were new in the area, we were in our home for just two weeks; we didn’t know doctors, we didn’t know hospitals, and Beebe, our local hospital, was able to take such amazing care of me! If we were still living in the New York area, I don’t know if I would have received the personalized care I received at Beebe. The whole time I was in the hospital, we never had to go looking for a nurse; the nurses were always right there, in such a caring, loving way, both physically and emotionally. If I had to get sick like this, I was in the right place – I was at Beebe Healthcare!”

After spending six weeks in the hospital, three weeks in rehab, home care and finally outpatient physical therapy, Nick finally came home – to his new home in Milton and a fresh start at life. He has come a long way and made amazing progress. “It’s all about the people, their attitude, their caring, their compassion, their friendliness,” Nick and his family shared. “That’s really what it is all about. You develop relationships with people while they are taking care of you, helping you return to good health. Every single person truly helped to save Nick’s life. Nick and his family are so very thankful,” says Nick’s sister, Roe Kraitz. “We are grateful beyond belief for the extraordinary care my brother received from Beebe Healthcare.”

Nick and Terry DiMinno made a generous donation to celebrate the excellent care Nick received at Beebe. As a community-based, not-for-profit healthcare system, Beebe Healthcare depends on the generous support of individuals, corporations, businesses, and private foundations. All gifts to Beebe Healthcare, large or small, are tax-deductible and are channeled through Beebe Medical Foundation. Please consider making a gift today and sharing your story with our community. To make your proud personal donation or to learn more about Celebrate Excellent Care, go online to www.beebemedicalfoundation.org or contact the Beebe Medical Foundation at 302-644-2900 or write to [email protected].