Beebe’s Caring Staff Made All the Difference for Jim, a COVID-19 Survivor 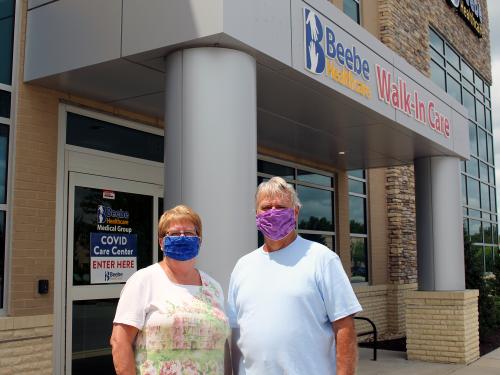 Jim DeBastiani didn’t know his test was going to turn up positive, too.

His wife, Barb, had not been feeling well in mid-April, but he felt fine at the time. When Barb went to go get tested at Beebe Healthcare’s coronavirus testing location near Long Neck, he was also tested as a precaution.

The Georgetown couple were both positive, and two days later, concerning COVID-19 symptoms began for Jim, while Barb’s case ended up being mild.

“It was very difficult to breath,” Jim says. “I was shivering even indoors. I was wearing three shirts sweatpants and socks. And I was still shivering.”

Knowing he needed care and unsure what his best option was, he talked with his primary care physician, Dr. Bryan Villar, about the possibility of making an appointment at Beebe’s COVID Positive Care Center at the Georgetown Health Campus before going to the emergency department.

“I told Barb I didn’t want to go to sleep because I didn’t think I was going to wake up,” Jim says.

Jim remembers barely being able to make it to the door on the day of his appointment, but the Beebe team was there waiting for him with a wheelchair and smiles, he says.

“They probably had seen a ton of cases before me, but I felt like they treated me like I was the first person they had ever seen. The staff was remarkable. They had all the care and concern,” Jim says.

A chest X-ray showed Jim’s lung were significantly congested, causing his cough and shortness of breath. With a prescription for medication to help dull the symptoms, Jim headed home to continue isolating to avoid any spread of the virus.

It helped at home that he had his own personal nurse in Barb, who was a retired RN who had worked for the state health department for years.

“A lot of people supported us by going to the grocery store and even bringing us chicken soup,” Barb says.

Despite both being positive, Barb says she experienced a different set of symptoms. Hers reminded her of a really terrible sinus infection.

With his concerning symptoms, the Beebe team and Division of Public Health continually checked up on Jim.

Once again, the Beebe team lifted his spirits with each call. Jim said the isolation was difficult, so having the bright voice on the other end of the phone was something he looked forward to each time, especially when he heard from Kim Willoughby, the charge nurse at the COVID Positive Care Center, who constantly checked up on Jim.

“You can’t fight this on your own,” he says. “When you get to this stage where your lungs are so full with fluid and you don’t know when your next breath is going to come from, you can’t do it by yourself. You would sink into despair.”

After his visit at the COVID Positive Care Center, Jim felt like he started to improve. The symptoms lessened, and he recalled making that first trip out to the mailbox. He sat down, out of breath, for quite a while after, but it gave him the confidence that he was getting better.

The next big step was a follow-up X-ray of his lungs. The results – clear.

“I started crying actually and I called Barb,” Jim says. “The first X-ray not only showed all that congestion but also a sack of some sort – a nodule. I hadn’t had that before. With COVID, it sometimes happens, but even that had cleared out.”

Jim is still building back his stamina and did drop 25 pounds during the few weeks of his illness, but he’s happy to be able to go to the grocery store again and see their two daughters and three grandchildren, including one born during the pandemic.

Both still wear a face covering whenever they go out and have a great appreciation for the healthcare workers wearing them every day, Jim says.

He also knows how lucky he was.

“We’re not invincible but we feel very,” Jim said, pausing “… it’s a funny feeling knowing you had it and survived, thinking, wow I’ve been there.”