New Babies in the New Year

Ringing in the New Year on the second floor Women’s Health wing is always an exciting time. This year was no different as Beebe’s labor and delivery teams watched the clock to see who the first baby of the New Year would be. 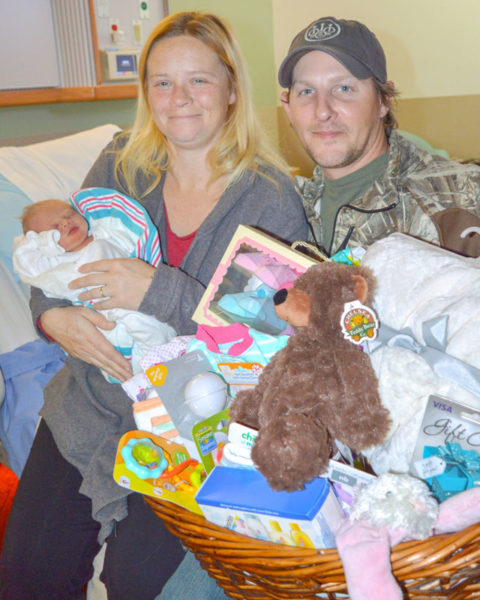 This year, the first Beebe Baby of 2018 was Ellie Spare. She joined the world at 1:51 a.m. on Monday, January 1. Her parents, Katherine and Phil Spare were delighted, even though they weren’t expecting to have a New Year’s Day baby.

Ellie wasn’t due until mid-January. However, Miss Ellie had other plans.

“I was doing laundry on Sunday and whoosh, my water broke,” recalls Katherine. The Millsboro couple was admitted to the hospital about 30 minutes later. Dr. Angela Caswell-Monack of Beebe Women’s Healthcare – Plantations delivered Ellie.

“We joke that Ellie is here only because of her brother,” said Phil. “We weren’t planning to have any more children, but her brother wished for a baby in a wishing well and two weeks later we found out we were pregnant!”

Beebe Healthcare is creating the next generation of Women’s and Children’s Health with its planned $180 million expansion plan. The plan calls for a new four-story building to be named Margaret H. Rollins Pavilion on the Lewes campus. The second floor will be a dedicated women’s and children’s wing where patients and medical teams will utilize private birthing suites, easy access to state-of-the-art operating rooms, and a comfortable atmosphere created with families and babies in mind.

Highmark Blue Cross Blue Shield Delaware has recognized Beebe Healthcare as a Blue Distinction® Center for Maternity Care. Blue Distinction Centers are nationally designated hospitals that demonstrate expertise in delivering improved patient safety and better health outcomes, based on measures that were developed with input from the medical community.

PROJECT UPDATE [JUNE 15, 2018]: Due to anticipated changes in our community’s use of healthcare facilities and services, we have re-evaluated the scope of our expansion and decided to enhance and expand access to advanced medical technologies and outpatient services rather than proceeding with the construction of additional inpatient rooms on the Lewes Campus. To learn more about these changes, and how we’re continuing to make the next generation of care a reality in Sussex County, click here: https://www.nextgenerationofcare.org/2018/06/15/healthcare-is-changing-and-so-is-beebe