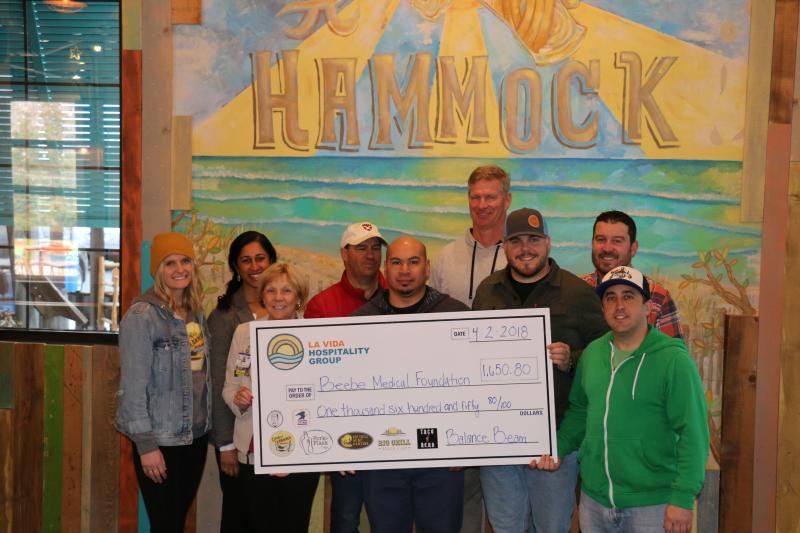 As Rupert Murdoch once said, “In motivating people you’ve got to engage their minds and their hearts. I motivate people by example, and perhaps by excitement, by having productive ideas to make others feel involved.” For Lewes resident Khalil “Karl” Saliba, those are words to live by. He’s the idea man behind Balance Beam, one of the Cape Region’s most collaborative fundraising efforts in recent memory.

According to Saliba, his idea began with an old Jim Beam bourbon barrel stashed away in his basement. “I liked its look and its character,” he says, and he began thinking about ways to repurpose it. As an avid craft beer lover, he was also thinking that quality brews deserve to be recognized as more than just thirst quenchers. Saliba says, “Good wines enjoy a great reputation and acceptance, so why not good beers?”

In fact, last month, NBC’s “Better” series for diet and fitness reported that there are now seven science-backed reasons that a pint of beer a day may come with a host of health benefits.

According to research at the University of California, the antioxidant content of beer is equivalent to that of wine, but the specific antioxidants are different because of the barley and hops used in beer production. Other studies conclude that balanced beer consumption may also contribute to heart health, stronger bones, and lower the risk of developing diabetes. Experts also advise that people should always discuss their personal health benefits and risks with their medical provider.

The series suggested that beer lovers tend to view beer as a guilty pleasure – maybe because all those suds are sometimes associated with weight gain. However, when consumed in moderation, the benefits of a pint of beer go may far beyond helping one wind down after a stressful week.

Beam + Balance: All Saliba’s concept needed was to get some good beer makers on board. Enter Gary Cannon, Adam Newman and Holly Ski from the popular Gary’s Dewey Beach Grill. Known for their healthy eats and hearty drinks, these hospitality pros are also approaching the first-year anniversary of their new brewery, 38°-75° Brewing Co. “We loved the idea of creating a balanced craft brew, especially utilizing the old Jim Beam wooden barrel,” says brewer Newman.

And so the collaboration began. As any craft brewer will say, developing a recipe is a matter of trial and error. They will also say that there is a unique camaraderie among the brewers in Sussex County’s expanding brewery business. “We all like to share our ideas, and want to support one another,” says Newman. That’s certainly true for giving back to the local community. Cannon notes that his team is the creator and host of Dewey Beach Brew Fest. They also support the Center for Inland Bays, Buddy Walk, Dewey Goes Pink, and Dewey Artists Collaboration. Later this month they will participate in Attack Addiction, a local fight against the current opioid epidemic.

“The concept of balance is more sustainable than the constant parade of fad diets,” says Saliba, who also broached the subject with Josh Grapski, his spin class classmate. Grapski is also managing partner at LaVida Hospitality Group, which oversees Crooked Hammock Brewery in Lewes. As the Balance Beam brewing efforts continued to expand, Chris Wood, head brewer at Crooked Hammock, opened the doors to his larger brewing facility and invited Cannon, Newman, Ski and Saliba to bring their Jim Beam barrel to the Hammock. The result was an expanded, creative collaboration among these passionate beer aficionados.

“We all wanted to give this brew our very best,” says Wood. “As Apple’s founder Steve Jobs once said, ‘The only way to do great work is to love what you do.’ That’s us for sure!”

No stranger to supporting the Sussex County community, the La Vida Hospitality team took Saliba’s idea one step further. Along with 38°-75° Brewing Co., they created a healthy balance campaign to support Beebe Healthcare’s wellness programming in the community through its fundraising arm, Beebe Medical Foundation.

“We are so grateful to all of the individuals and local businesses who supported this the fundraiser event! The generous donations help to benefit the variety of Integrative Health and Wellness Programs we offer to the community,” says Rita Karapurkar Williams, health coach with Beebe Integrative Health & Wellness.

To whet local beer lovers’ taste buds prior to the March 2 fundraising event, the two breweries created an Imperial Coffee Stout made with Panamanian coffee beans locally sourced from The Point Coffee House & Bake Shoppe in Rehoboth Beach. Next, the beer was aged in the Jim Beam bourbon barrel and was offered in bottles and on tap.

In keeping with Saliba’s original vision, the fundraising effort was designed to underscore the benefits of enjoying balance in one’s life. “You can take good care of yourself and still indulge in the many delicious choices offered within Delaware’s tight-knit brewing community,” says Erica Wiegman, event organizer and marketing manager for Crooked Hammock Brewery. “Enjoying good quality beer, and taking care of ourselves along the way, is not a bad way to live.”

The Balance Beam benefit for Beebe featured a variety of silent auction items including monthly prize packages from Involution Yoga, along with special class packs from Beach Barre and Sea Barre. In keeping with the event’s theme, Quakertown Wellness offered a chakra balance reading for bidders. The result is good news for the Beebe Medical Foundation which received a $1,650.80 donation for its wellness program. Saliba also points out that it’s gratifying to know that the group generated community awareness regarding the important message about balance.

“Despite the cold, snowy weather March 2, Crooked Hammock was packed, and all had a great time,” says Judy Aliquo, foundation president and CEO. “What a wonderful turnout of many Beebe supporters and community members. We are so grateful to Karl Saliba, who is also a Beebe Medical Foundation board member. He helped organize the event working with the teams from LaVida Hospitality and Gary’s Dewey Beach Grill.” Aliquo adds that the generous donation will help Beebe continue to offer presentations in the community, covering a variety of topics such as mindful eating, meditation, tips for restoring health naturally, and personalized medicine.

“We are also currently offering a free chair yoga series to veterans at the Sussex Vets Center in Georgetown,” said Williams.

Learn about classes and workshops, as well as screenings and health fairs, by visiting Beebe’s online calendar at www.BeebeHealthcare.org/Calendar and by following Beebe Healthcare on Facebook.