Purchase a copy of Beebe Healthcare’s 100th Anniversary history book and have it signed by the author and photographer on Monday, January 30, from noon to 1:30 p.m., in front of the Gift Shop at Beebe Healthcare’s Medical Center in Lewes.

Both the noted Delaware award-winning writer, Pam George, and well known and accomplished photographer, Kevin Fleming, will be available to sign and personalize your copy of Two Men with a Dream: The Story of Beebe Healthcare, which includes Voices Behind the Dream: The Story of Beebe Healthcare, a lively film about the organization and those who have been a part of its history and who will be part of its future. The film may also be purchased separately.

On Sunday, January 15, Beebe Healthcare hosted a premiere showing of the film at Milton Theatre. The event was attended by many voices featured in the film, as well as by team members and Beebe family members.

The release of the book and the film conclude a nearly two-year project telling the story of Beebe Healthcare’s 100 years as a local health institution bringing medical care and treatment to southern Delaware.

The book and film projects represent a monumental task of collecting decades of documents, stories, old photographs, and historic details. Dozens of hours were spent interviewing Beebe family members, team members, and community leaders, who have all played a part in Beebe’s 100 years in Lewes. Listen to heart-warming and hilarious stories from those who talk about what the hospital has meant to them, to their families, and to the town. 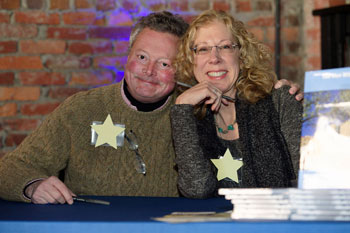 The short film captures people talking about their memories of an early Beebe Hospital and how the organization has changed, of the hospital’s founders, and of Lewes. Just under 40 minutes long, the film tells stories most people have never heard about Lewes and about those involved in making Beebe what it is today. The film even includes historic, black-and-white footage of a horse and carriage traveling along Savannah Road at the beginning of the century. Viewers will recognize the buildings that are still here today. 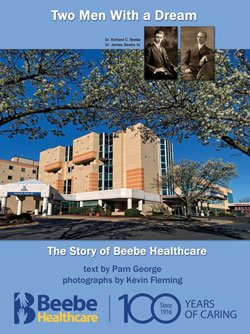 Beebe Healthcare is a not-for-profit community healthcare system with a charitable mission to encourage healthy living, prevent illness, and restore optimal health for the people residing, working, or visiting in the communities we serve. It offers services throughout Southern Delaware for residents and visitors, including a 210-licensed-bed hospital, a cancer treatment center, and outpatient facilities providing walk-in care, lab, imaging, and physical rehabilitation services. For more information, please visit us online at www.beebehealthcare.org.

Kevin-and-Pam-signing: Kevin Fleming, noted photographer, and Pam George, author, will be signing copies of “Two Men with a Dream: The Story of Beebe Healthcare,” in front of the Gift Shop at Beebe’s Medical Center in Lewes, on Monday, Jan. 30.

History Book Cover: Shown is the cover of the new Beebe history book commemorating 100 years of caring. The book and accompanying film DVD are available for purchase at multiple locations in Sussex County, including the Gift Shop on the first floor of Beebe’s Medical Center in Lewes.