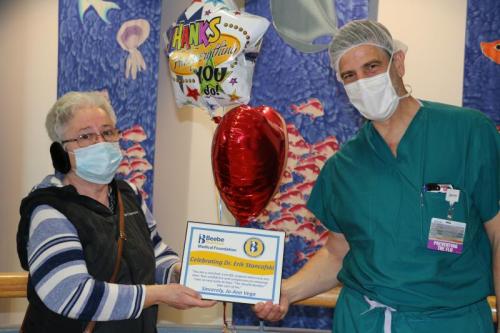 The thought of going to the hospital in the age of COVID-19 was terrifying for Jo-Ann Vega, a retired human resource professional from the New York metropolitan area. While already suffering from diverticulitis, she also endured unusual, sudden bouts of excruciating abdominal pain beginning in November 2020. A week later, she realized she had no choice but to visit Beebe’s Emergency Department.

“I was stubborn, willful and afraid,” said Vega. She didn’t realize at the time what an excellent experience of care she was about to embark on.

The doctors and staff tended to her quickly and professionally, but, she said, “When doctors with long faces come into the room, you know that is not a good sign.”

Dr. Jacqueline Smith, her Emergency Department physician, and Dr. Erik Stancofski, her surgeon, told Vega that she looked better on the outside than her CT scan revealed of her inside. After an ultrasound showed a serious infection in her colon, Vega was admitted to Beebe where she received massive doses of antibiotics over five days. After the infection was under control, she was told she would require surgery a few weeks later. Vega was released and was able to go home until her scheduled surgery on New Year’s Eve. After her second negative COVID-19 test, she reported for surgery at 5:30 a.m.

“The compassionate and talented staff in pre-op were a wonderfully comforting to me,” said Vega. “I felt so cared for, rather than worked on.” Her partner was able to be with her during this time, and they were both comfortable knowing Vega was in good hands.

After she awakened in recovery, Dr. Stancofski came in to tell Vega she handled the surgery very well. He removed 8-10 inches of her colon laparoscopically, and he also removed her appendix, all with a negative biopsy. After a couple of days, Vega was once again released.

Her positive experience at Beebe increased Vega’s appreciation for the extremely focused staff she encountered. They told her that Dr. Stancofski treats everyone as if they are part of his family, and she subsequently nicknamed him The Stealth Bomber.

“His confidence and compassion were amazing,” said Vega. “I was so lucky for him to take care of me. He is a real find, a terrific surgeon and a very nice man! The staff at Beebe is outstanding!

Now, a few months post- surgery, Vega said she feels like a new person. She recently published a memoir, “Moments in Flight,” and hopes to resume teaching history at Osher Lifelong Learning Institute once classes resume in person.

Looking back on her experience, Vega implores people to seek help if they are in pain.

“A lot of people in their 60s, 70s and older tend to ignore their pain when they should seek help instead,” she said.

As a community-based, not-for-profit healthcare system, Beebe Healthcare depends on the generous support of the community it serves. To make a gift to celebrate the excellent care you or a loved one has received, please visit Beebe Medical Foundation at www.beebemedicalfoundation.org or call 302-644-2900. Want to share your story? Contact Amanda Neal at aneal@beebehealthcare.org.